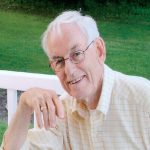 William P. (Bill) Elliott, 91, of Beaver, Pennsylvania passed away peacefully on Wednesday, April 26, 2017 at home surrounded by family and friends. Bill was born in Beaver to Frances Patterson Elliott and Paul Elliott. He was a lifelong resident of the Beaver County area and a well-known figure in the community.
Bill attended Beaver and then New Brighton High Schools. He left for the Navy in the middle of his senior year and served his country with distinction patrolling the Eastern United States coast searching for enemy submarines and ships during the waning years of World War II. He attended college at Geneva, Villanova University and the University of Pittsburgh and graduated with a degree in chemistry. For four years he taught chemistry at Aliquippa High School while taking graduate courses at night. To earn more money, he became a Koppers Company chemist and maintained a teaching fellowship at the University of Indiana.
Eventually, Bill entered into the retail business with his father-in-law Errol Dunn. Beaver Falls Paint & Glass Co. was a mainstay on 7th Avenue in Beaver Falls until Bill’s retirement in 1996. He was active in many business and professional organizations. He was a member of the Beaver Falls Chamber of Commerce, a 50 year member of the Consistory of the Valley of New Castle as a 32 degree Mason, and an 18 year member of the Beaver Rotary Club. For many years, he volunteered with the Beaver County Conservation District and actively supported the Brady’s Run Lodge Maple Syrup Festival.
He had a life-long love of music. At Villanova, The Quartet sang on the Coca Cola Spotlight Bands with Les Brown’s orchestra and Eddie Peabody, the Banjo King. Bill played the ukulele and banjo, sang in several church choirs and most recently with the Park Presbyterian Choir in Beaver where he also served as an Elder.
Bill is survived by his beloved wife and best friend Jane Hird Elliott. He was an extremely loving father of his four children; son, Don Elliott and his wife Suzy of Indianapolis, Indiana; daughters, Barbara Crishi and her husband Greg Crishi and Kris McKissick, both of Flower Mound, Texas; and Victoria Fleming and her husband Barry Fleming of Greensburg, Pennsylvania. He was preceded in death by brothers J. Donald Elliott of San Diego, California; brother Phil Elliott of Carson City, Nevada; and sister Mary Frances Elliott of Beaver, Pennsylvania. He is survived by 6 grandchildren, 2 great grandchildren and many nieces, nephews and other good friends.
The family will receive family and friends during a memorial visitation Friday, April 28, 2017, from 2 pm until 4 pm and 6 pm until 8 pm in the Noll Funeral Home, Inc., 333 Third St., Beaver. A Memorial Service will be conducted Saturday, April 29, 2017 at 11 am at Park Presbyterian Church, Beaver. Online condolences may be shared at nollfuneral.com.
Donations in remembrance can be made to Park Presbyterian Church, 275 Commerce Street, Beaver, PA 15009, or the Beaver Humane Society, 3394 Brodhead Road, Aliquippa, PA 15001.