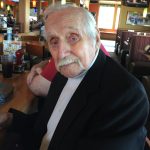 Walter was born on May 21, 1918 to Heinrich and Maria Henning Schuffert in Braddock, PA.  Walter attended Muddy Creek School.  He served in the Army Corps of Engineers in the Pacific Theater during World War II.  He worked 32 years in Crucible Steel retiring in 1980.  Walter was an avid bowler and a member of the Crucible Choir Men’s Chorus.

Mr. Schuffert married Electa Grace Best who preceded him in death on August 15, 1997.  He was also preceded in death by four brothers Heinrich Jr., Emery, William and John and a sister Katherine Schuffert Rich.

He is survived by his daughter Marcia and her husband David Watts of Glasgow, Pa. a son Walter Martin Schuffert Jr. and his wife Donna of East Liverpool, Ohio and a daughter Linda and her husband Robert Burns of Nashville, TN.  Eight surviving grandchildren are Erik Watts, Lisa Watts Helmininack, Casey Peterson, Jay Peterson, Lea Schuffert, Robert Jr., Richard and Kevin Burns.  He is also survived by 13 great grandchildren.

A private funeral was held at Schwerha-Noll Funeral Home in Midland, PA. on December 31, 2016.  Military honors will be held next week when his ashes are interred at Sylvania Hills Cemetery in Rochester, PA. Online condolences may be shared at nollfuneral.com.

The Schuffert Family would like to give their deepest thanks to Valley Oaks Care Center in East Liverpool, Ohio for their loving and compassionate care of their father the 14 months of his life.