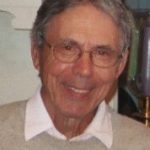 Tom was born in Verona, PA in 1932. Tom’s lifelong love of golf began at the age of 13 while caddying at Westmoreland Country Club and Oakmont Country Club. He was a 1950 graduate of Penn Hills High School where he played on the golf team. As a high school senior, Tom was the captain of the golf team and captured the individual golf championship in Western Pennsylvania and placed second in the state. He went on to a distinguished golf career at Juniata College serving as captain of the golf team each year and winning the Middle Atlantic Conference and the Western Maryland Invitational. He graduated from Juniata College in 1954. Tom served 2 years of active duty in the U.S. Army as a Private First Class before beginning his professional golf career as an assistant pro at Edgewood Country Club. He became the head golf pro at Titusville Country Club in 1961. Tom played in the PGA tournament in Chicago in 1961. He and his wife, Cheran moved to Beaver, PA in 1982 where he served as the head golf professional at Seven Oaks Country Club until he retired in 1993. He shot 4 holes in one over the course of his career and enjoyed travelling and playing in many tournaments of which he won several over the years. Tom was a member of the Half Century Tri-State PGA Club. In 2016, Tom was inducted into the Penn Hills High School Sports Hall of Fame.

After his retirement, Tom continued to provide golf instruction in the community for many years. He was a kind and patient teacher of the sport he loved. Tom also enjoyed daily walks with Cheran on River Road in Beaver and feeding the squirrels at the Beaver Cemetery.

Tom was a member of Our Lady of the Valley (St. Peter and Paul) Catholic Church in Beaver, PA, where he served as an usher. He also volunteered with the World Vision Organization. Tom was known for his strong faith in Jesus, his gentle soul, and his light-hearted sense of humor.

Due to the pandemic, there will be no public viewing, and funeral services will be private for immediate family only. Arrangements are being conducted by Noll Funeral Home Inc., 333 Third Street, Beaver, PA. Online condolences may be shared at www.nollfuneral.com.

A Mass of Intention for Tom will be held on March 20, 2022 at noon at Our Lady of the Valley Saints Peter and Paul Catholic Church in Beaver, PA.