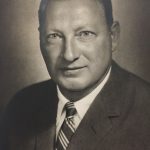 Born December 12, 1920, in Pittsburgh, Ted was the son of John and Elizabeth Hvozdovich Ondocsin.  Ted lived in Homestead as a child.  He graduated from the University of Pittsburgh’s School of Engineering with a bachelor’s degree in Metallurgy in 1941.  He then served as an officer in the U.S. Navy during World War II in the Pacific.

Ted met and married Ann Douglas in Beaver in 1948.  They raised a family of three children in Patterson Township and later lived in Sewickley Heights and Pompano Beach, FL after retirement.  Ted and Ann then moved to Plano near two of their children.

Ted worked for Mackintosh-Hemphill Company for most of his career, first as a metallurgical engineer in both Midland and Pittsburgh before entering sales.  He retired as Vice President of Sales for Mack-Hemp in 1982.  He was an active member of the American Iron and Steel Institute.  Ted also served on the Board of Directors for Polymer Enterprises, Inc. in Greensburg, PA.

Ted was a caring, fun-loving, and generous person who touched the lives of many people.  He was a consummate gentleman and set a high example for his children and grandchildren.

Ted was preceded in death by his wife of 62 years, Ann, and his sister, Gabriella Cappelli.

Private entombment will take place in Beaver Cemetery Mausoleum.  Relatives and friends are welcome to visit the family following the service at the Wooden Angel, Leopard Lane, Beaver, at 1:00 PM. Online condolences may be left at nollfuneral.com

Contributions in Ted’s memory are welcome at The First Tee of Pittsburgh or the University of Pittsburgh, School of Engineering.