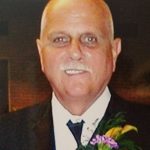 Born September 24, 1946 in St. Louis, MO, he was a son of the late Lewis “Rip” and Phyllis Smalley Van Winkle. A resident of Rochester since 1969, he had a 38 year career as a railroad conductor with Conrail, retiring in 2004. A man of many talents, he was an avid golfer, playing with the syndicate at Rolling Acres, Beaver Falls. Rip also started his pool career at the former Blue Room, Beaver Falls and excelled with the Beaver County TAP/APA Leagues. For many years, he acted as a coach for Rochester youth baseball, and his love of music led him to being a DJ at the former Armando’s, Rochester. He was a passionate Pittsburgh Steelers and Pirates fan and an active member of the Rochester Turners.

In addition to his parents, Rip was preceded in death by his sister, Linda Van Winkle.

Friends will be received during a memorial visitation Sunday, September 25, 2016 from 12 pm until the time of prayers at 3 pm in the Noll Funeral Home, Inc., 333 Third St., Beaver. A Celebration of Life will follow at 4 pm at the Rochester Turners. Online condolences may be shared at nollfuneral.com.

The family would like to thank Good Samaritan Hospice for the compassionate care given Rip.