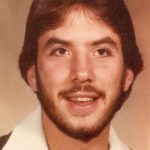 Steven (Steve) R. Fink, 55, of Beaver, went home to be with the Lord on November 4th at the Good Samaritan Hospice at the Heritage Valley Beaver Medical Center after a courageous battle with Multiple Sclerosis.

Steve was born on July 24, 1962, in New Brighton, to Mabel Dawson Fink and the late Robert C. Fink. Steve graduated from Beaver High School in 1980 and Thaddeus Stevens College of Technology in Lancaster, PA in 1982. He married his High School sweetheart Carol Danneker in 1984 and moved to South Carolina where Steve worked as Head Plumber for the county of Charleston. He was diagnosed with MS in 1989 the same year his son Jeremy was born. Steve Retired after twelve years when he could no longer work. He moved back to Beaver to live with his Mother in 1996 when he could no longer care for himself. Steve was known for his crazy sense of humor, kind heart and gorgeous smile. He loved music, his family and all Pittsburgh sports team.

Friends will be received in the Noll Funeral Home Inc., 333 Third Street, Beaver, PA 15009 on Monday, November 6th 2017 from 3pm until the time of service at 7pm. Online condolences may be shared at nollfuneral.com

Donations can be made to the MS Society.