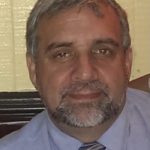 Scott retired in 1997 from the US Navy after 20 years of service, having worked with Navy Communications. After retirement, he worked as a Correctional Officer as a Sergeant for Pasquotank Correctional Institution and later worked security. A member of the NRA and American Legion, Scott loved to cook, read, was a gamer and an avid outdoorsman in hunting and fishing.

In addition to his father, Scott was preceded in death by his former wife, Sherry Lynn Peabody.

Per Scott’s wishes, there will be no public visitation or services. Local arrangements are being conducted by the Noll Funeral Home, Inc, 333 Third St., Beaver. Online condolences may be shared at nollfuneral.com.

A celebration of Scott’s life will be held at a later date.

In lieu of flowers, Memorial Contributions may be made to Beaver Area Memorial Library. 100 College Ave., Beaver, PA 15009