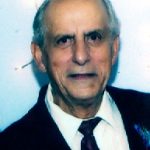 Born September 23, 1926 in Aliquippa, he was a son of the late Vito and Rose Vigliotti Longo. Rocco served proudly in the U.S. Air Force during WWII. Upon his return, he settled in Industry where he began his career as a metallurgist with Crucible Steel, Colt Industries, retiring in 1990 after 40 years with the company. In his spare time, Rocco served on the Western Beaver School Board for 10 years, Beaver County Girl Scout Board for 12 years, performed Karaoke and as a DJ for many local charity benefits, and helped those needing a lift as a volunteer driver for cancer patients. As a faithful member of St. Blaise Parish, he practiced his faith by hand making over 150,000 chords for rosaries used by several parishes in the local area.

In addition to his parents, Rocco was preceded in death by his beloved wife Mary Antonini Longo, and his son, John Anthony Longo.

Friends will be received Thursday, July 20, 2017 from 2 p.m. until 8 p.m. in the Noll Funeral Home, Inc., 333 Third St., Beaver. A Mass of Christian Burial will be celebrated by his pastor, Fr. Michael Yaksick, Friday, July 21, 2017 at 10:30 a.m. at St. Blaise Parish, Midland, followed by interment at Mount Olivet Cemetery, Aliquippa. The family asks that everyone attending mass assemble at St. Blaise Parish instead of meeting at the funeral home Friday morning. Online condolences may be shared at nollfuneral.com.

In lieu of flowers, memorial contributions in Rocco’s name may be made to the B.F. Jones Memorial Library, 663 Franklin Avenue, Aliquippa, PA 15001, the Carnegie Free Library, 61 9th Street, Midland, PA 15059, or a charity of your choice.

The family would like to thank the doctors, nurses, and staff at Medical Oncology, Moon Township and Heritage Valley, Sewickley for going the extra mile in caring for their dad.