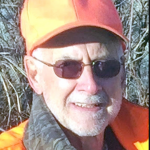 Preceding him in death, besides his parents, was a brother, Nicholas Stevenson in 1969.

Surviving are two sons, Jay Stevenson and John (Claire) Stevenson, and a grandson, Roger Stevenson, all of Myrtle Beach, S.C. He is also survived by his sister, Armenia (Randall) Seybert of California; a brother, Joseph (Bonnie) Stevenson of Midland and a special nephew with whom he shared his love of hunting, Glenn (Jody) Stevenson, Madison, Ind.

As per his wishes, a Memorial Mass will be celebrated Wednesday, February 22, 2017 at 10:30 a.m. at St. Blaise Church, celebrated by his pastor, Father Michael Yaksick. Interment will take place at a later date at the Beaver Cemetery.

Arrangements are being conducted by the SCHWERHA-NOLL FUNERAL HOME, 600 Beaver Ave., Midland. Online condolences may be shared at nollfuneral.com.

In lieu of flowers, memorial contributions may be made in Bobby’s name to the Carnegie Free Library, 61 9th St., Midland, PA 15059.