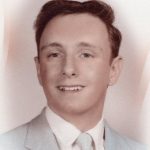 Born March 5, 1938 in Bridgewater, he was a son of the late Raymond and Kathryn Shafer. A resident of Chippewa Twp. for over 50 years, Robert retired from Conrail after nearly a 26-year career. He was a member of the National Association of Retired and Veteran Railway Employees (NARV).

In addition to his parents, Robert was preceded in death by his sister, Lois Brashears.

In lieu of flowers, memorial donations in Robert’s name may be made to the Beaver County Humane Society.