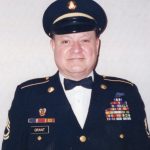 Born April 12, 1944 in New Brighton, he was a son of the late Charles and Dorothy Grant. A 1963 graduate of Rochester High School, Robert played football, and later in life, went on to coach both football and basketball for his alma mater. He had a distinguished 31-year career in the U.S. Army, proudly serving during the Vietnam War where he earned the Silver Star, Bronze Star, and three Purple Hearts. Robert was active with the VFW #128 in Rochester, the Vietnam Veterans of America, Chapter # 862, and the Monaca American Legion # 580. He was a life member of the Purple Heart Association, and the National Guard. Robert also served with the 28th Signal Society, VFW National Home for Children, and was a past Commander for both District 25 and Post #128. He was a faithful member of Faith Community United Methodist Church, Rochester.

In addition to his parents, he was preceded in death by his sister, Darlene Hovancik; and brother-in-law, Ronald Erath.

Friends will be received Thursday, April 21, 2022, from 4 p.m. until 8 p.m. in the Noll Funeral Home, Inc., 333 Third St., Beaver. A service, with full military rites by the Vietnam Veterans of America, Chapter #862, will be conducted Wednesday, April 27, 2022, at 2 p.m. at the National Cemetery of the Alleghenies, Bridgeville. Online condolences may be shared at nollfuneral.com.