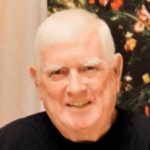 Robert “Bob” William Thompson, 88, passed away unexpectedly on August 10, 2021 at St. Mary’s Hospital in Leonardtown, Maryland. He was also known as “Happy” to his grandchildren, great-grandchildren, and others. Bob was born on June 18, 1933 to James and Eva Thompson of Conway, PA where he grew up. He was drafted into the United States Army by President Truman in April 1953. During his service, he received basic training at Camp Pickett, VA, and medical training at Aberdeen Proving Grounds, MD. He served in the Korean War as a medic and then returned to Fort Hood, TX where he was honorably discharged in October 1956.
Bob earned the rank of Staff Sgt. and received the following medals while serving: Korean Service, United Nations, National Defense, Good conduct, and an expert in rifle training. Most meaningful to Bob was a letter written by the President of Korea thanking him for the time he served there. He was a lifelong member of the Veterans of Foreign Wars (VFW) Post 6713 in Conway, PA. Bob was proud to be an Army veteran and loved serving our country.
Following his discharge, he met and married his wife, Nancy Creese, on August 9, 1958 at Sts. Peter & Paul Catholic Church in Beaver, PA. They were married for 46 years until her death in 2004. Bob and Nancy lived in Vanport, PA where they raised two daughters, Deborah and Robin . Bob worked at Penn Central Railroad, now Conrail, for 24 years and at Supportive Services located in Beaver Falls for 28 years, caring for adults with mental illness until his retirement. The clients loved Bob as he would take them to various activities and events throughout Beaver County and the Pittsburgh area.
Bob enjoyed bowling for the VFW State League and playing softball for the Beaver County League. He was a member of the Van Buren Homes Men’s Club. Bob loved hunting and trout fishing with his dad, brothers, nephews, and grandchildren. He enjoyed doing word search puzzles and was an avid fan of the Pittsburgh Steelers, Pirates, and Penguins. One could always guarantee Bob was watching some sort of sports game on television.
Upon Bob’s retirement in PA, he relocated to Maryland, where he resided with his daughter and family until 2019 and then became a resident at St. Mary’s Nursing and Rehabilitation Center until his death. He received excellent care and was a friend to many of the staff and residents. The past two years were challenging for Bob and his family during the pandemic lockdowns. However, when visits were permitted, he loved being outside in the sun and visiting with family and friends. His family is so grateful that he was able to celebrate his last birthday with loved ones. He was able to hold his newest great-granddaughter for the first time and received hugs from his great-grandson, which were long overdue.
Bob was preceded in death by his parents, wife Nancy, daughter Deborah Langdon, sisters Peggy Toogood, Mary Jane Thompson, and Nancy Monaci. He is survived by his daughter Robin Young (Rob) MD, his grandchildren Lauren Perz (Dan), Bobby and Trevor Young; great-grandchildren Wesley and Nora Perz; his brothers James, John, and Gary Thompson, PA and sisters Joyce Whitehouse, AZ, and Betty Palakovich (Frank), PA; sister-in-law Judith LeFebvre, FL; brother-in-law Dennis Creese, CO, and many nieces, nephews, great-nieces, and great-nephews.
Friends will be received on Thursday August 19th, 2021 from 2pm-4pm and 6pm-8pm in the Noll Funeral Home Inc., 333 Third Street, Beaver, PA 15009, where a funeral service will be conducted on Friday August 20, 2021 at 11am. Online condolences may be shared at www.nollfuneral.com.
The family requests memorial contributions be made to St. Jude Children’s Research Hospital at www.stjude.org, an organization that had a special meaning to Bob and his family.