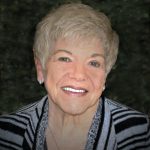 Rita DiMarzio, 85, ‘Sister Rita’ as her three sons affectionately called her, was devout in her Catholic faith and made certain that her sons were as well. Her nickname meant more than just religious observance; she truly lived the life of a slightly cantankerous nun offering joy and compassion to everyone in her own selfless but stubborn way.

We are sorry to say farewell to a best friend and inspiration to many. Her smile would light up a room and she had the personality to back it up; a gift that seemed to run in her family. She was a person who transcended her life experiences and her modest but wonderful upbringing in Midland (‘from the alley’ as Dad would constantly remind her). Alley or not, there she gathered the type of knowledge and natural instincts that were beyond what any of us could understand. It may have been because she was the eighth of nine children of the late Anna (DeMatteis), and Alexander DiCiccio.  She was preceded by siblings Bernadina and Ralph (Bernabie), Edmund, Carmella, Orland, and Louis (DiCiccio) and is survived by her brother, Anthony of Beaver Falls, and sister Dorine (LaValle) of Ohioville.

She was a proud cheerleader for the formidable Lincoln High School Leopards which is where she began her life-long love affair with Carl that was tragically interrupted in 1986 and after 35 years will now finally continue. She used this hiatus from him to share her generous love and joy with everyone she could; to worry incessantly about her family’s health and happiness and to listen to and advise anyone who asked. She will now spend some time sharing all of those experiences with dad.

She’s traveling again. She frequently traveled to visit her three sons who were eventually called by the singular name ‘JimJeffJohn’ which erased all confusion about who she was talking to. She traveled but hated to fly but not because of the plane. The issue was that every stranger she met along the way would tell her their life-story. That’s who she was; a friendly face with engaged conversation and compassionate advice. We gave her headphones to escape this situation but she never used them since she secretly liked hearing people’s stories. This was a possible outgrowth of listening to stories during her career as a hairdresser at her namesake Rita’s Beauty Salon.

Though not an actual nun, Rita was a faithful member of the St. Blaise Parish, Midland, a member of the Saint Vincent DePaul Society and contributor to many a Church dinner and bazaar where her talented cooking and phenomenal baking skills taught to her by her mother and passed on to her sons and daughters-in-law were on display.

A Mass of Christian burial will be celebrated at 10:30 am on Wednesday, February 3rd, 2021 at St. Blaise Parish. Family and friends are asked to meet at the church. A private burial service will follow at Beaver Cemetery. Online condolences may be shared at nollfuneral.com.

In lieu of flowers and gifts, memorial contributions may be made to Catholic Charities – Diocese of Pittsburgh or a charity of your choice.