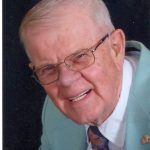 Born September 28, 1928 in Smethport, PA, he was a son of the late John R. and Mary Anne Earle Cooper. A resident of Beaver most of his life, he retired in 1983 from Armco Steel Co. in Ambridge following a career spanning 37 years. Richard was a faithful member of Park Presbyterian Church, Beaver, formerly serving as a Deacon and Elder. He was also active in the Men’s Bible Class, Homebuilders Class, St. James Lodge #457 F & AM, Beaver, New Castle Consistory, New Castle, American Legion Post # 641, Baden, Beaver Area Heritage Association, and Church Golf League. During the Korean Campaign, he proudly served as a member of the National Guard.

In addition to his parents, Richard was preceded in death by four brothers, Robert E., Russell W., John R., Jr., and Donald Cooper; and one sister, Audene Cooper.

Friends will be received, Sunday, June 18, 2017 from 12:00 p.m. until 3 p.m. and 6 p.m. until 8 p.m. in the Noll Funeral Home, Inc., 333 Third St., Beaver. A funeral service will be conducted by his pastor, Reverend Mark Boyd, Monday, June 19, 2017 at 11 a.m. at Park Presbyterian Church, Beaver. A private interment will follow at Sylvania Hills Memorial Park, Rochester. Online condolences may be shared at nollfuneral.com.