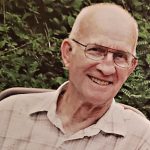 Born December 8, 1924 in Industry, Richard was a WWII veteran, going on to work at Crucible Steel, Midland until 1980, where he enjoyed 40 years of retirement. In his spare time, he loved gardening, being outdoors, and spending time with his family. Richard will be mostly remembered as a devoted husband to his wife of 73 wonderful years, Audrey, and a caring and proud father of his four children.

In addition to his parents, John and Stella Douds, Richard was preceded in death by his two brothers, John “Bunky” Jr. and William; one sister, Mary; and two step-brothers, John and Daniel Popp.

As per Richard’s wishes, there are no arrangements. Professional services have been entrusted to the NOLL FUNERAL HOME, INC., 333 THIRD ST., BEAVER. Online condolences may be shared at nollfuneral.com.