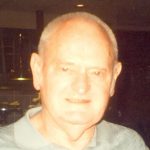 Born May 21, 1933 in Glenwillard, he was a son of the late William James and Genevieve Bronder McCarriher. A resident of Baden since 1988, Richard was a proud veteran of the U. S. Army, having served during the Korean War. He had worked for many years as a steelworker with Armco and Plexco, going on to a second career in maintenance at Concordia and Sewickley Hospital, finally retiring as a custodian from Walmart. Richard was a member of the Baden American Legion and the United Methodist Church, Baden.

In addition to his parents, he was preceded in death by two brothers, James and William McCarriher; sister, Dolores Ketterer; daughter-in-law, Denise McCarriher; and great-grandson, Benjamin James McCarriher Franks.