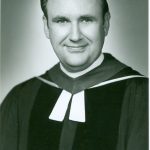 Born March 21, 1929 in Alexis, IL, he was a son of the late Frank R. Churchill, Sr. and Hadassah McConnell Churchill. A 1947 graduate of Alexis High School, he attended Monmouth College, IL, graduating from Sterling College, KS and later, the United Presbyterian Church of North America’s Pittsburgh Xenia Theological Seminary. Reverend Churchill began his life of service with churches in Pittsburgh and Northern Pennsylvania, moving on to provide spiritual leadership at Mill Creek Presbyterian Church, Hookstown, as a chaplain with Christians United of Beaver County, the Medical Center, Beaver and the Geriatric Center of Beaver County. A well-known pastor in the Beaver-Butler Presbytery, Reverend Churchill retired as the stated supply of the First Presbyterian Church, Rochester.

In addition to his parents, he was preceded in death by his first wife, Rebecca Ann Gibson Churchill and his second wife, Carolyn R. Wood Churchill.

Friends will be received Thursday, October 26, 2017 from 2 p.m. until 4 p.m. and 6 p.m. until 8 p.m. in the Noll Funeral Home, Inc., 333 Third St., Beaver. A funeral service will be conducted Friday, October 27, 2017 at 11 a.m. at Vanport Presbyterian Church, Vanport, followed by interment at Service Creek Presbyterian Cemetery, Raccoon Twp. Online condolences may be shared at nollfuneral.com.