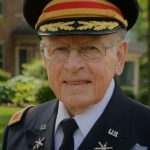 Born July 1, 1934 in Harrisburg, he was a son of the late Carl C. and Doris Christian Neely. Reverend Neely commenced a stellar military career upon his graduation from Gettysburg College as a commissioned 2nd LT in the U.S. Army. After deploying to a combat unit in Vietnam, he took command of a nuclear missile battalion in Germany, and accepted several assignments, including serving at NATO, the Defense Intelligence Agency and the Joint Chiefs of Staff in the Pentagon. As a Colonel, he was on the team responsible for the development and fielding of the Patriot Missile System. As Project Manager of the Anti-Tactical Missile System, his group developed the capability to use the Patriot to engage SCUD missiles in the Middle East.

During his military career, he was awarded the Silver Star, two Bronze Stars, four Air Medals, the Legion of Merit, Vietnamese Cross of Valor, along with the Joint Services Commendation Medal, two Army Commendation Medals, and various campaign and service medals. Reverend Neely retired from the Army as a Colonel, following 30 years of service to his country.

Reverend Neely went on to serve his community as a respected minister, having been ordained as a priest in the Episcopal Church in 1990. He served as a vicar at St. Mark’s in Knoxville, assistant vicar at St. Stephen’s in McKeesport, and vicar at St. John’s, Donora, and Transfiguration in Clairton. He came to the local area as Rector of Trinity Church in Beaver for 14 years, retiring in 2007. Although retired, Father Carl worked as an interim priest at several churches in the area. He was currently serving as the Rector at St. Luke’s Anglican Church in Georgetown and he continued to help anyone who called.

Father Carl also served as Chaplain of Life, Beaver County, was Past President of the Beaver Area Heritage Foundation and of the Beaver Ministerium.

In light of current events, all services will be private. Professional arrangements have been entrusted to the Noll Funeral Home, Inc., 333 Third St., Beaver. Online condolences may be shared at nollfuneral.com. A public memorial service will be announced and conducted at a later date.