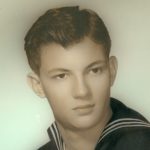 Paul “Cookie” Livada, 74, of Midland went home to be with his Lord and Savior, Jesus Christ, on Monday, September 5, 2016 at Heritage Valley, Beaver.

Born December 22, 1941 in East Liverpool, Ohio, he was the beloved son of the late Milan and Bertha Paulovich Livada. Paul was a 1959 graduate of Lincoln High School, Midland, and served in the U.S. Navy from 1960 – 1964. He retired from CSX Railroad in 2002 after 34 years of service as an engineering dispatcher. Paul was a member of St. George Serbian Orthodox Church, Midland and had belonged to the Serbian Club, the American Legion Post 0481, and VFW Post 8168, all in Midland, and the TCU International Union.

Paul enjoyed small game and deer hunting with family and friends. He loved to grill, and faithfully made homemade Pogaca bread for all the family get-togethers during the holidays. Paul was a dedicated Pittsburgh sports fan, especially the Pittsburgh Steelers. He held close to his heart all of his family members and his railroad friends from Conway, Florida, and Atlanta.

In addition to his parents, he was preceded in death by his brother, Daniel Livada in 1975.

A memorial visitation will take place Sunday, September 11, 2016 from 3:00 pm until 5:00 pm in the Schwerha-Noll Funeral Home, 600 Beaver Avenue, Midland, where a service, officiated by his nephew Stephen Petrosky, will begin at 5:15 pm. Interment will occur at a later date. Online condolences may be shared at nollfuneral.com.