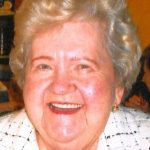 Born August 24, 1923 in Morgansville, WV, she was a daughter of the late Clarence and Louie Maude Childers Murphy. Nina retired in 1985 from Phoenix Glass, coming back to Brighton Twp. in 2016 after residing in Mt. Holly, NC. She attended First Presbyterian Church, Beaver.

In addition to her parents, Nina was preceded in death by her husband, Thomas J. Morris in 2014; her daughter, Mary Lee Rinehart Shivler in 1959; son-in-law, John R. McCandless in 2009; infant brother, Clarence Leo Murphy; and two sisters, Lucille Burhammer and Juanita Frank Mavero.

All arrangements for Nina were private. Professional services have been entrusted to the NOLL FUNERAL HOME, INC., 333 THIRD ST., BEAVER. Online condolences may be shared at nollfuneral.com.

Memorial donations in Nina’s name may be made to Good Samaritan Hospice, at giving@concordialm.org.