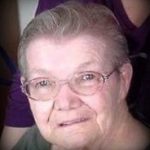 Myrtle G. (Avery) Revelant, 85, of Vanport, passed away on July 16, 2017 at Rochester Manor surrounded by her loving family.
Born on January 20, 1932 in Monaca, she was the daughter of the late Harold G. and Grace W. (Hoffman) Avery and a member of Beaver Assembly of God. Myrtle lived in Conway, Vanport, and Elderberry Ct., Ambridge.
Along with her parents, she is preceded in death by her husband, Nicholas Revelant; two sisters Dorothy Garza and Mary Rape; two brothers and sisters-in-law, Henry and Shirley Avery, and Richard and Joyce Avery; Two brothers-in-laws, John “Jack” Dillon and Frank DeHass; a son-in-law, John Gwin; and two great-grandchildren, Christopher L. Towns Jr, and Link Revelant.
Myrtle will be greatly missed by her two sons and daughters-in-laws; Glenn D. Revelant of Vanport, Daniel H. and Tammie Revelant of Economy; one daughter and son-in-law, Barbara G. and Gary L. Gleason of VA; two sisters, Ann DeHass and Virginia Dillon, both of Beaver ; six grandchildren, Timothy (Angel) Revelant, Bryan (Kristen) Revelant, David and Jason Revelant, and Brittany and Jessica Gwin; thirteen great-grandchildren; And a very good friend Elsie Holman of Beaver.
Friends will be received on Tuesday July 18, 2017 from 5pm to 8pm in the Noll Funeral Home, 333 Third Street Beaver PA 15009 where a funeral service will be held on Wednesday July 19, 2017 at 11 am by Pastor William Beatty. Private Interment will follow at Sylvania Hills Memorial Park. Online condolences may be shared at nollfuneral.com