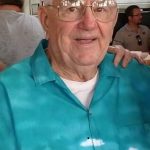 Mike “Brates” Susich, 90 of Franklin Park, formerly of Industry passed away, Friday, November 5, 2021.
Born September 27, 1931 in Midland, he was a son of the late Paul & Dorothy Susich and was a member of the St. George Serbian Orthodox Church, Midland. He began working at a young age at the Brick Yard in Industry, and as a member of the Laborer’s Union working many years with his special friends, the Modany Brothers. A veteran of the US Army, he had also belonged to the Midland VFW and the American Yugoslav Club, in Midland.
Preceding him in death besides his parents was his wife of 55 years, Luby on June 9, 2010, 2 brothers, Nick and Paul Susich, his brothers-in-law, Amil Padezanin, Pete Laketa, and his sister and brother-in-law, Louise and Joe Resanovich.
His family was very important to him and he would always end phone calls and visits with “Love You More!”. He will be sadly missed by his daughter, Dina (Chuck Gibson) Susich, with whom he resided, 2 sons, Michael (Leslie) Susich, West Palm Beach, FL, Daniel (Jessica) Port St. Joe, FL, a brother, Larry (Ruth) Susic, Ohio, sisters, Martha Padezanin, Arlington, VA, Helen (Ken) Janke, Brighton Twp., Anne Laketa, Lemont IL, 4 grandchildren, Brandon (Melissa) Susich, Katiann and Matthew Susich and Taylor Susich, with whom he shared a special bond. He is also survived by many nieces and nephews, and a special friend, Jimmy Emerick, who always saved Brates a spot at Josephine’s.
Friends will be received Monday from 2-4 & 6-8 in the SCHWERHA-NOLL FUNERAL HOME, 600 Beaver Ave., Midland where a Pomen will be held at 7:30. A funeral service will be conducted Tuesday at 10:30 am at St. George Serbian Orthodox Church followed by interment at the Beaver Cemetery. Online condolences may be shared at nollfuneral.com. in lieu of flowers, memorial contributions may be made to St. George Serbian Orthodox Church, 30 10th St, Midland, PA 15059.