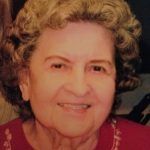 Born April 8, 1920 in Johnstown, she was a daughter of the late George and Anna Komar. Mary was first employed by the Sylvania Corporation, Altoona, making tubes used in proximity fuses for bombs during WWII. After she married Andrew Demko, they moved to Wilkinsburg, and later, to the Sheraden neighborhood of Pittsburgh, where they lived for 30 years, raising their children while Mary continued to work, first for the Horne’s Department Store, and then, the U.S. Post Office in downtown Pittsburgh. Andy and Mary retired and moved to Glendale, AZ for 5 years before going on to Wilmington, NC where they lived for 22 years until Andy’s death in 2005 brought Mary back to the region. Throughout her life, Mary loved to play bingo, cards, and the penny slots at the casino.

In addition to her parents and Andy, she was preceded in death by her son, Daniel in 2017; her sister, Ann; and brothers, George, Joseph, Michael, John, Andrew, and William Komar.

As per Mary’s wishes, there will be no visitation or service, and interment will be private. Professional arrangements have been entrusted to the NOLL FUNERAL HOME, INC., 333 THIRD ST., BEAVER. Online condolences may be shared at nollfuneral.com.