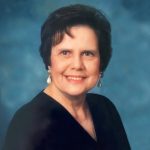 Marie C. Heinle, 86, of Beaver passed away early Sunday morning, April 26, 2020, at the Good Samaritan Hospice House, Wexford, surrounded by her loving family. For two years prior, Marie resided at Concordia at Villa St. Joseph where she received excellent assistance and care.
Born January 29, 1934, in Pittsburgh, she was the only child of the late Lt. Col. Ruben A. Cicone Jr., and Marie DeRosa Cicone.
Preceding her in death was her beloved husband, Edward William Heinle, Jr., MD, her father, mother and stepmother, Mildred Hallam Cicone.
Surviving are 2 daughters, Patricia Hoover, Esq., Beaver; Anne (Jeff) Ingros, Beaver; four sons, Dr. Edward W. (Patricia) Heinle III, Danville, PA; Dr. Michael S. (Dawn) Heinle, Cranberry, PA; Glenn H. (Debbie) Heinle, Hamilton, VA; Dr. Robert A. (Dr. Rachel) Heinle, Wilmington, DE; 25 cherished grandchildren, and 2 great-grandchildren.
Raised in East Liberty and Highland Park, she graduated from Sacred Heart High School and Mt Mercy College (now Carlow University) in 1956 with a degree in Medical Technology. Marie then worked at Presbyterian Hospital until the birth of their first child.
She and her young family spent 2 years in Germany when husband, Ed, was stationed there as an US Army doctor in the early 1960’s, and this may have led to her love of travel which included several trips to Italy, Ireland, Germany, Israel and Hawaii.
Marie quickly settled into an active life of volunteerism when she and Ed moved to Beaver. Among the many groups in which she participated were The Marian Guild, Saints Peter and Paul PTG, Beaver Boosters, and Beaver County’s first hospice (founded by her husband). Marie was a devoted and active member of Saints Peter and Paul Roman Catholic Church, Beaver. She faithfully held the Wednesday noon hour of Eucharistic Adoration for over 30 years. Counseling at Lifeline, a crisis pregnancy center, was one of her passions where she assisted many women facing an unplanned pregnancy. Marie knew how the gift of children beautifully expanded one’s life. For her, there was no greater title on earth than “Nana”.
She enjoyed spending a week or two nearly every summer for the last several decades at Chautauqua Institution and was a proud graduate of the nation’s oldest book club, Chautauqua Literary and Scientific Circle.
A small family mass of Christian burial was held at Saints Peter and Paul by Father Robert Miller, followed by interment at the Beaver Cemetery, where she has been laid to rest next to Ed, her husband of 55 years. A public mass and celebration of life will be announced in a future edition of the Times. Arrangements are being conducted by the Noll Funeral Home, Inc., 333 Third St., Beaver. Online condolences may be shared at nollfuneral.com.
Memorial contributions may be made if desired in Marie’s name to the Angel Fund, c/o Saints Peter and Paul Church, 255 Third St., Beaver, PA 15009, or Lifeline Crisis Pregnancy Center, 647 Third Street, Beaver, PA 15009.