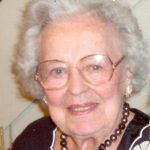 Margaret B. Wallace of Beaver, PA passed away peacefully in her sleep on February 11, 2017 at the age of 102.
She was born at home in Beaver Falls on June 10, 1914. She lived in Beaver for over 64 years and was a member of the Chippewa United Methodist Church. Margaret was employed by Westinghouse in Vanport for 15 years, retiring in 1985. She was loved and adored by all who had the privilege of knowing her. Cherished by a large family, she enjoyed her Hungarian heritage and cooking with her family. A beloved matriarch, she will be dearly missed and forever honored.
She was proceeded in death by her husband, Owen T. Wallace in 1958.
Surviving are her son Harry, living at home, her daughter Carol Riggle of Patterson Township and her son Charles and daughter- in- law Anita of Las Cruces, New Mexico.
Margaret has seven grandchildren: Laura (Scott) Gibbs, Debby Kroll, Marci Jo (Randy) Morris, Robert (Patty) Riggle, Phillip (Sarah) Wallace, Ana (Michael) Hettinga and Sara Wallace; 12 great- grandchildren, Jessica, Shayne, Ian, Joey, Ashley, Paul, Jamie, Rebecca, Andrew, Sydney, Owen, and Anya; and 4 great-great-grandchildren, Mia, Karma, John, and Justin.
Friends will be received Thursday, February 16, 2017 from 2 p.m. until 4 p.m. and 6 p.m. until 8 p.m. in the Noll Funeral Home, Inc., 333 Third St., Beaver. A funeral service for close friends and family will be conducted Friday, February 17, 2017 at 11:00 a.m. at Chippewa United Methodist Church, Chippewa Township. A private interment will take place at Beaver Cemetery, Beaver. Online condolences may be shared at nollfuneral.com.
The family would like to extend its most sincere gratitude and thanks to Heartland Hospice and Homemaker Home Health for the thoughtful care and concern they so lovingly provided Margaret.
In lieu of flowers, please donate to either the Beaver Falls Salvation Army, 414 16th Street, Beaver Falls, PA 15010, or the Beaver County Humane Society, 3394 Brodhead Road, Aliquippa, PA 15001.