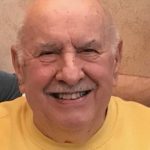 Born February 4, 1935 in Midland, he was a son of the late Leo and Vera Wasko Tepsic. Leonard served proudly in the U. S. Air Force during the Korean War where he was stationed in Africa. Upon his return to Midland, he worked several years for the FAA as an air traffic controller at Pittsburgh International Airport. Leonard retired in 1995 as co-owner of Deramo’s Riviera Lounge, later, going on to work at Giant Eagle in Rochester. He was also a member of the St. Anthony Club and the Knights of Columbus and served as Police Commissioner of Midland.

In addition to his parents, Leonard was preceded in death by his wife of 48 years, Janet Deramo Tepsic; and a brother, Donald Tepsic.

He will be greatly missed by his son, Nicholas (Stephany) Tepsic; daughter, Phyllis (Michael) Cindrich; brother, Anthony (Rosalie) Tepsic; and five devoted grandchildren, Nicholas, Zachary and Lindsay Tepsic, and Christina and Micey Cindrich; all of whom lovingly called him “Buddy.”

As per Leonard’s wishes, visitation and the funeral service were private, followed by a private interment at Beaver Cemetery. Professional arrangements have been entrusted to the NOLL FUNERAL HOME, INC., 333 THIRD ST., BEAVER. Online condolences may be shared at nollfuneral.com.

In lieu of flowers, memorial donations in Leonard’s name may be made to St. Jude’s Children’s Hospital, 501 St. Jude Place, Memphis, TN, 38105, or StJude.org.