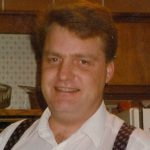 He was born January 28, 1958, in Rochester, the son of Betty and Clarence Lacey, originally of Industry. Kerry was a 1976 graduate of Western Beaver High School. After attending Indiana University of Pennsylvania, Kerry became president of Local 502 of the United Plant Guard Workers of America. He then went on to be a regional director and business agent for the International Union, Security Police and Fire Professionals of America (SPFPA), representing security and safety professionals from Maine to Maryland. Since 2011, he was a Senior Clerk in the Beaver County Treasurer’s Office.

Kerry was known as an amicable “man about town,” known to many by his voice. He broadcasted local high school sporting events on radio station WBVP, adding commentary and fielding post-game call-ins. He was also an avid Pitt Panthers fan.

He was preceded in death by his father Clarence; brother Patrick, Johnstown; and sister Kristen MacLeod, Maryland.

Friends will be received Saturday, April 22, 2017, from 2 p.m. until 6 p.m. in the Noll Funeral Home, Inc., 333 Third Street, Beaver, where a funeral service will be held at 6 p.m. with Deacon Joe Wirag presiding. Burial will be private. Online condolences may be shared at nollfuneral.com.

In lieu of flowers, the family suggests that donations, if desired, be made in Kerry’s name to the American Heart Association, 3582 Brodhead Road, Suite 201, Monaca, PA 15061, the Beaver County Humane Society, 3394 Brodhead Road, Aliquippa, PA 15001, or a charity of one’s choice.