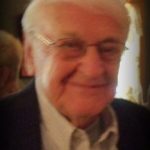 Born July 16, 1922 in Wampum, he was a son of the late James and Sarah Davidson Dripps.  Kenneth retired after 47 years of driving truck for various transportation companies as a member of the Western Pennsylvania Teamsters.  He was also a faithful member of the First Assembly of God Church, Beaver Falls for over 50 years.  He had an unwavering faith in God.

In addition to his parents, Kenneth was preceded in death by his first wife, Doris A. Weaver Dripps in 1983; his second wife, Rosetta Midon Dripps in 2012; and brothers, Cecil, Lloyd, and Roy Dripps, and Clarence and Edward Price.

Friends will be received Tuesday, November 15, 2016 from 2 pm until 4 pm and 6 pm until 8 pm in the Noll Funeral Home, Inc., 333 Third St., Beaver, where a funeral service will be conducted Wednesday, November 16, 2016 at 11 am by Pastors Paul Poole of First Assembly of God, Beaver Falls, and Timothy Michaux of Beaver Assembly of God, Brighton Township.  Online condolences may be shared at nollfuneral .com.

The family would like to thank the attentive employees at Providence Care Center, Beaver Falls, and Brighton Rehab and Wellness Center, Brighton Township for the compassionate care given Kenneth.