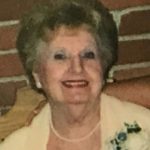 Born June 14, 1924 in Rochester, she was a daughter of the late Dewey and Rena Triance. June was a 1942 graduate of Beaver High School, going on to proudly serve as a member of the U. S. Coast Guard, stationed in New York City. Upon her return to the area, she graduated from Garfield Business Institute, Beaver Falls, and was employed at the Beaver County Housing Authority and Gimbel’s Department Store. June was a faithful parishioner of Saints Peter and Paul Roman Catholic Church, Beaver and an active volunteer of the Crimson Line Auxiliary at the former Beaver Valley Geriatric Center.

In addition to her parents, June was preceded in death by her beloved husband, Robert Langnecker, and three sisters, Eunice Beardshall, Patricia Waters, and Joan Triance.

Friends will be received during a memorial visitation Friday, August 4, 2017 from 2 p.m. until 4 p.m. and 6 p.m. until 8 p.m. in the Noll Funeral Home, Inc., 333 Third St., Beaver. A funeral mass will be celebrated by Fr. Charles Bober, Saturday, August 5, 2017 at 10:30 a.m. at Saints Peter and Paul Roman Catholic Church, Beaver. Online condolences may be shared at nollfuneral.com.

If desired, please make a donation in June’s memory to a charity of your choice.