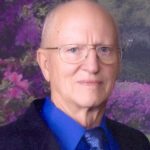 Born March 16, 1933 in Proctor, WV, he was a son of the late Clemente and Marguerite Klug. Joseph left WV to fulfill his duty to country as a Staff Sergeant in the U.S. Air Force, stationed in Germany. He continued his life of service as an active member of the St. Vincent DePaul Catholic Church of New Martinsville where he participated in the Holy Name Society, assisted with many Friday night fish frys, and drove youth group members to numerous activities. Joseph was a member of the Moose Lodge in Martinsville where he enjoyed playing cards with friends.

In addition to his parents, Joseph was preceded in death by five brothers, Charles, Bernard, Bill, Leo, and Louis Klug, and two sisters, Agnes Klug and Eleanor Fox.

Friends will be received from 9 a.m. until 11 a.m. Monday, October 30, 2017 at St. Vincent DePaul Church, New Martinsville, WV. A memorial mass will follow at 12 p.m. at St. Joseph’s Catholic Church, Proctor, WV with interment at St. Joseph’s Cemetery. Arrangements have been entrusted to the Noll Funeral Home, Inc., 333 Third St., Beaver, PA. Online condolences may be shared at nollfuneral.com.