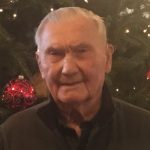 Joseph E. Smyda, 93 of Brighton Twp passed away Thursday, December 24, 2020 at Heritage Valley, Beaver.
Born April 21, 1927 in Ohio Twp, Pa, he was a son of the late John and Mary Hodor Smyda and had been a resident of Brighton Twp. since 1968. Joe was a veteran of the US Navy having served during WW II, and is a proud plank owner of the USS Midway. He retired in 1982 from Crucible Steel and Alloy, Colt Industries, Midland, and was a member of the Glasgow Lodge #485, F & AM, the Syria Shriners, New Castle Consistory, Consistory Legion of Honor, Caravan #18, VFW, Little Red School House, and was a Charter Member of the Brighton Twp. Historical Society, and former volunteer fireman with the Brighton Twp. Volunteer Fire Department.
He is survived by his beloved wife, Jane Wilson Smyda; a son, Chester (Selene) Smyda, all of Brighton Twp.; sisters, Dorothy Bednar and Marge Askland; two grandchildren, Thaddeus (Melissa) Smyda and Anastasia (Dan) White; along with four great-grandchildren Atticus Smyda, and Sebastian, Ignatius, and Kalliope White.
In addition to his parents, Joe was preceded in death by three brothers, John, George, and Robert Smyda; and five sisters, Susan Hodor, Mary Pillar, Elizabeth Baytos, and Roberta and Agnes Hendrix.
Arrangements have been entrusted to the Noll Funeral Home, Inc. 333 Third St., Beaver. Online condolences may be shared at nollfuneral.com.
Memorial contributions in Joe’s name may be made to the Brighton Township Volunteer Fire Department, 84 Grange Road, Beaver, PA 15009.