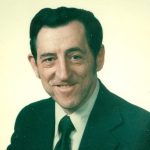 John W. Francis, 96, of Sewickley, formerly of Brighton Twp., passed away December 11, 2020 at the Masonic Village, Sewickley, where he has resided since November 2012.

John was born May 21, 1924 in Wehrum, PA. He was the third child of William Paul Francis and Grace Warner Francis. As a young child, the family moved to Blairsville where he graduated from Blairsville High School in the class of 1942. John started at Penn State College (University), but WWII interrupted his schooling.

John joined the Army Air Force in May 1943 and after completing his training, the US Army announced it needed more ground troops and fewer pilots so he was transferred to the Infantry. During a flight to Italy in October 1944, the plane he was on crashed in Lyon, France where he, along with 2 others, pulled soldiers from the wreckage. He earned the Soldier’s Medal (highest non-combat medal) for this action. Later that year, he also fought in the Battle of the Bulge. In addition to the Soldier’s Medal, he was awarded two Bronze Stars before being honorably discharged from the service in March 1946.

Following his time in the Army, he returned to Penn State where he received a Bachelor of Science Degree in Electrical Engineering in the class of 1949. In 1947, his sister, Jean, was working at Torrence Hospital with Virginia Powell and invited her home for Thanksgiving. John and Virginia started dating and were engaged at Christmas 1949 and married in April 1950. They were married for nearly 63 years prior to her passing in February 2013.

John started working at Duquesne Light Company in 1950 and worked in the Transmission and Distribution Department prior to retiring as a District Engineer in 1984.

In retirement, John revealed his many artistic talents in wood carving and wood turning, making numerous beautiful projects. He was a member of Turners Anonymous, Western PA Woodworkers, and Beaver County Wood Carvers. In addition, he was a 32nd Degree Mason, an officer at the Beaver County Rehabilitation Center (BCRC), and a long-time member of First Presbyterian Church in Beaver.

Preceding him in death were his wife Ginny, parents, sister, Rosina Nagy, and one grandchild, Rachel Francis.

Due to COVID-19, there will be no funeral service at this time. Noll Funeral Home, Inc., 333 Third St., Beaver is handling all arrangements. Online condolences may be shared at nollfuneral.com.

If you would like to remember John with a monetary gift, please consider donating to First Presbyterian Church, 252 College Ave., Beaver, PA 15009, or the charity of your choice.

The family would like to thank the staff at Masonic Village, Sewickley, along with Dr. Chris O’Donnell and Dr. Barbara Levkoy for their loving care of John during the past 8 years.