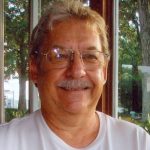 John E. Smith, Jr.,76, of Chippewa Twp., formerly of Brighton Twp., went home to be with his Lord and Savior Wednesday, March 3, 2021.
Born November 19, 1944 in New Brighton, he was a son of the late John E. Smith, Sr. and Sarah (Winkle) Smith of Monaca, and son-in-law of his late beloved mother-in-law, Mable Benford and father-in-law, George W. Benford, Beaver. A lifelong resident of Beaver County, John retired in 2003 with 35-years of service at Horsehead Corporation, where he was a foreman in the Cinder Plant. John was a member of the Vanport Presbyterian Church, Vanport Twp. He served 4 years in the United States Marine Corps as a Corporal during the Vietnam War and also toured Europe 4 times during his service where he received the National Defense Medal, Good Conduct Medal, Rifle Sharpshooter Badge, and Pistol Marksman Badge. John was an avid Steeler and Pirate fan, loved watching World Wrestling, and was a member of the Beaver County YMCA in New Brighton where he enjoyed exercising and socializing with his many friends.
Surviving is his beloved wife of 24-years, Bonnie; his daughters & son-in-law, Anissa and George Klesser, Raccoon Twp. and Leeann Smith, Monaca; granddaughters Alexandra, Danielle, and Kayle Klesser; and great-grandchildren, Douglas and June. John will be missed by his brother and sister-in-law, Frank and Barbara Smith, Economy Borough; and two nephews, Cory and Shawn, and their families. He is also survived by his step-daughter and son-in-law Christine Wable and John Badeer, along with step-grandchildren, Will and Audrey Badeer, all of Fox Chapel; step-brother-in-law, Garry Benford and his wife, Pascal, Columbus, OH; and step-nieces, Erika Benford, Chicago, IL, and Alexis Benford, Columbus, OH.
As per John’s wishes, there will be no viewing. A memorial service will be conducted by Pastor Samson Covatch, at Bridgewater Presbyterian Church, Bridgewater, Saturday, March 13, 2021 at 11 a.m. A private interment will take place at Beaver Cemetery. Professional services have been entrusted to NOLL FUNERAL HOME, INC., 333 THIRD ST., BEAVER. Online condolences may be shared at nollfuneral.com.
In lieu of flowers, memorial donations in John’s name may be made to Good Samaritan Hospice, Heritage Valley, 1000 Dutch Ridge Road, Tower 4 B, Beaver, PA 15009.
The family also wishes to thank the wonderful nurses who cared for John with love and compassion during his stay at Good Samaritan Hospice, Heritage Valley, Beaver.