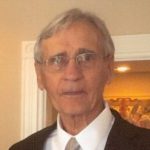 Born December 1, 1931, he was a son of the late Edna Winters Carr and had been a resident of Brighton Twp the past 60 years.  A Veteran of the US Army, he served during the Korean War and was a faithful member of the New Brighton United Methodist Church.  Jack retired from Babcock and Wilcox having worked in inspection and sales, and was a 1951 graduate of New Brighton High School where he played basketball and football, he was an avid golfer and enjoyed playing in several leagues and was a member and Past Master in 1970 with St. James Lodge, F & AM #457, Beaver.  After his retirement, he worked as the Zamboni driver at the Beaver County Ice Rink.

Preceding him in death besides his mother, was his step father, Donald Carr.

Friends will be received Monday from 2-4 & 6-8 in the Noll Funeral Home, Inc., 333 Third St., Beaver, where a service will be conducted Tuesday at 11:00 am, by his pastor, Revered Gary Hilton.  Online condolences may be shared at nollfuneral.com.

In lieu of flowers, memorial contributions may be made in Jack’s name to the New Brighton United Methodist Church, 1033 6th Ave, New Brighton, PA 15066.