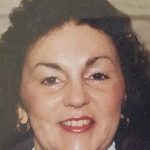 Joanne Elizabeth (Trimbur) Waida, 76, of Beaver Falls, passed away on Thursday, October 15, 2020, at UPMC Shadyside Hospital in Pittsburgh, surrounded by her loving family after an extended illness.

Born on May 12, 1944, in Butler, Joanne was the daughter of the late William and Elizabeth (Acquavita) Trimbur. She graduated from Mars Area High School in 1962 and later received her Associate Degree in Business Administration at the Community College of Beaver County.

Joanne worked at Heritage Valley Medical Center for many years, retiring as office manager of Corporate Education. More recently she was an administrative assistant at Seven Oaks Country Club. She was a member of Saint Monica Parish in Beaver Falls.

She married Richard A. Waida, Sr., the love of her life in 1962, and they made a home together in Beaver Falls where they raised three children. Joanne was known by everyone for her love of cooking and baking, and she enjoyed traveling in the U.S., Italy, Canada, and Mexico.

In addition to her parents, Joanne was preceded in death by her brothers, Thomas, David, William, and Leroy (Dale). She is survived by her brother Charles (Cathy) Trimbur, sisters Sharon (Tim) Duffy and Margaret (Russ) Cook, and many nieces and nephews.

Her life was celebrated in a private mass at Saint Monica Parish on Friday, October 23, 2020, and she will be interred at the National Cemetery of the Alleghenies in Washington County.  Professional services have been entrusted to the Noll Funeral Home, Inc., 333 Third St., Beaver.  Online condolences may be shared at nollfuneral.com.