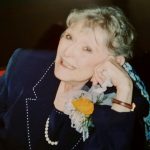 Joanna Ruth Lightner Ashburn, 89, of Beaver; loving mother, grandmother, great-grandmother; a woman with sophisticated style and an insatiable love for coffee, ice cream, and fabulous shoes, passed away peacefully at home on December 29, 2020.

Born December 16, 1931 in Altoona to the late Annamae and Herbert Lightner, she graduated from Altoona High School in 1949. Joanna first worked as a Bell Telephone operator, then took many night classes at Penn State and Carlow College before moving into the administrative assistant field for Valley Steel Products, Pittsburgh Tubular Shafting, and DataTel Resources, ending her professional career at Ellwood City Forge/Ellwood Group, Inc. After retirement, she greatly enjoyed volunteering at the Beaver Heritage Museum upon its opening, and the Carnegie Museums, Pittsburgh. In her earlier years, she was a longtime member of the Beaver Junior Women’s club, where she loved acting in the annual children’s plays. Having been a Beaver resident for 63 years, she was a former member of Trinity Episcopal Church, and most recently, Beaver United Methodist Church.

In addition to her parents, Joanna was preceded in death by her husband, Robert in 2013; son-in-law Edward Dunn; former daughters-in-law, Carol Hanson and Debby Pauley; and two fur babies, Winnie and Pixie.

Keeping health and safety in mind, the family has decided to have a Celebration of Life for Joanna at a later date. Burial will be private. Professional arrangements have been entrusted to the NOLL FUNERAL HOME, INC., 333 THIRD ST., BEAVER. Online condolences may be shared at nollfuneral.com.

If you feel so led, memorial contributions in Joanna’s name may be made to the Beaver County Humane Society, or any charity close to your heart.

A special thank you is given to Joanna’s caregivers, Sandy and Debbie for all their love and help.