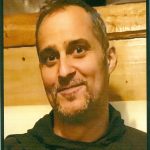 Jason A. Apsokardu, 49, of Chippewa Twp., formerly of Reading and Midland, passed away unexpectedly Saturday, January 23, 2021.

Born May 6, 1971 in Reading, he was a son of Karen Bock Alston, Clinton, and the late Anthony L. Apsokardu. Jason was a well-known chef in the area, having formerly worked as chief chef at the Sewickley Café for over ten years, and later, at Yolanda’s in Monaca. Jason was the chef for the 2009 Stanley Cup celebration for the Pittsburgh Penguins at Mario Lemieux’s home. He was a diehard Philadelphia sports fan and had attended Grace Lutheran Church, Rochester.

As per Jason’s wishes, both visitation and service were private. Professional arrangements have been entrusted to the SCHWERHA-NOLL FUNERAL HOME, 600 BEAVER AVE., MIDLAND. Online condolences may be shared at nollfuneral.com.