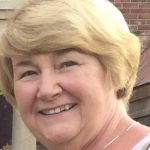 Janet Kathryn Gailey, 69, of Ohioville passed away on August 5th, 2017 at Heritage Valley Beaver.
Born on July 19, 1948 in Charleroi, PA, she was the daughter of the late John Stanley and Esther Coldren. Janet worked as a school nurse for Western Beaver School District for several years. She enjoyed reading, playing cards with her card club, and spending time with her family and friends.
Janet is preceded in death by a sister, Kay Young; and a brother, Ronald Coldren
She will be greatly missed by her husband of 50 years, Clark Wayne Gailey; two sons and daughters-in-law, Brad and Nicole Gailey of Ohioville, Craig and Jayne Gailey of Chippewa; six grandchildren, Tyler, Jenna, Morissa, Brett, C.J., and Kara; a brother and sister-in-law, Dan and Carol Coldren; and two sisters, Esther Saito and JoAnn DeCarlo. She is also survived by five sisters-in-law, a brother-in-law, and many nieces and nephews.
Friends will be received on Wednesday August 9th, 2017 from 2p-4p and 6p-8p in the Noll Funeral Home Inc., 333 Third Street, Beaver PA 15009. A Funeral Service will be held at 10:30am on Thursday August 10, 2017 at New Salem Presbyterian Church, 348 Salem Church Road, Midland PA 15059. Online condolences may be shared at nollfuneral.com