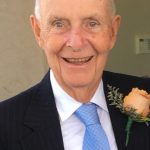 James R. Smith, 87, of Brighton Twp. Pennsylvania, passed away November 19, 2021, with his loving family by his side.
Born April 10, 1934, in Youngstown, Ohio, he was the son of the late James H. and Mary (Garde) Smith. A veteran of the U.S. Army, Jim was a Conrail railroad clerk for 45 years, as well as serving as a meter reader for Brighton Twp Water Authority for 30 years. He was a faithful member of Our Lady of the Valley Parish, Saints Peter and Paul Roman Catholic Church, having served as an Eucharistic Minister and he was active with Brighton Twp Athletic Association as a coach. Jim also loved spending his winters in Myrtle Beach.
James is survived by his three sons, James (Lisa) Smith, Jr., and Tom (Janet) Smith, all of Hopewell Twp., PA, and Ron (Diane) Smith, of Lebanon, Illinois; two daughters, Maryann Smith, Windermere, FL, and Susan Ward, Ohioville, PA,; a sister, Marie (Steve) Sirocky, cherished grandchildren, Jessica (Marshall) Shaw, Christopher Smith, Brittany Smith, Emily and Hannah Smith, Mary Beth Ward, and Caitlin (Zack) Walker and great-granddaughters , Norah Shaw and Cecelia Walker.
In addition to his parents, he was preceded in death by his beloved wife of 60 years, Mary G. Smith; and two sisters, Claire Bing, and Anne Kennedy.
Friends will be received on Monday, November 22, 2021 from 2pm-4pm and 6pm-8pm in the Noll Funeral Home Inc., 333 Third Street, Beaver, PA, 15009. A Mass of Christian Burial will take place at Our Lady of the Valley Parish, Saints Peter and Paul Roman Catholic Church, on Tuesday, November 23, 2021 at 10:30 am, conducted by Father Robert Miller. Online condolences may be shared at www.nollfuneral.com.
Private Interment will take place at Beaver Falls Cemetery.
In lieu of flowers, Memorial Contributions may be made in Jim’s name to Saints Peter and Paul School, 370 E. End Avenue, Beaver, PA 15009