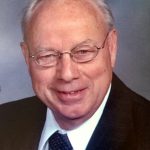 James P. Ellsworth, 86, of Beaver, PA, died at home on March 31, 2017 in the arms of his loving wife of nearly 60 years, Patricia Finnerty Ellsworth.  In addition to his wife, Jim is survived by four children:  James (Olga) of Bethel Park, PA, Michael (Susan) of Boardman, OH, John (Bridget) of Peters Township, PA and Mary (Jeff) Pastore of Hartville, OH.  In addition, he is survived by 10 grandchildren:  Shannon, Kacey, Kaitlyn, Maura, Patrick, Matthew and Colleen Ellsworth, and Caroline, Nolan and Connor Pastore.  He also leaves behind a sister-in-law, many nieces, nephews and friends.  He will be dearly missed by all.

Born in New Castle on February 19, 1931 to the late Paul and Mary Ellsworth, he grew up in New Castle, PA and Youngstown, Ohio.  He graduated from South High School in Youngstown and Youngstown College in 1953 with a degree in Mechanical Engineering.  After graduation, he was employed by Westinghouse in Beaver, PA, where he worked in various capacities for over 40 years, retiring as Engineering Manager in 1994.  During his career at Westinghouse, Jim was awarded more than 25 patents related to his work in designing and developing circuit breakers.  He was also a proud veteran of the United States Army.

He was a faithful member of Saints. Peter and Paul Parish for over 60 years and attended mass daily with his wife.  He was a Eucharistic Minister and volunteered in many other capacities with the church.  He coached the Van Buren Homes little league baseball teams in Beaver for many years.

He enjoyed his life to the fullest and brightened the days of those he encountered.  By far, his greatest joy and most cherished gift was his family.  He attended more recitals, plays, concerts, programs and sporting events for his grandchildren than he could ever count.  Annual family vacations with his wife, children and grandchildren were some of his happiest moments and his family cherishes these memories.  He enjoyed golfing and breakfast meetings with fellow retirees from Westinghouse.

He is preceded in death by his parents, his infant son, Edward, his brother, Jack, seven brothers-in-law and six sisters-in-law.

Friends will be received on Monday April 3, 2017 from 2 to 4 and 6 to 8 at the Noll Funeral Home Inc, 333 Third Street, Beaver, PA.  Mass of Christian Burial will be celebrated on Tuesday April 4, 2017 at 11 am at Saints Peter and Paul Catholic Church in Beaver, PA by his pastor, Father Robert Miller.  Interment will take place on Wednesday April 5, 2017 at 10 am at Calvary Cemetery in Youngstown, OH.  Online condolences may be shared at nollfuneral.com.

In lieu of flowers, the family respectfully requests that memorial donations be made to Saints Peter and Paul Parish in Beaver.