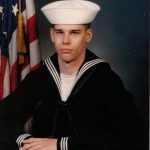 James (Jimmy) Andrew Rowe, 47 of Falls Church, VA, passed away unexpectedly on Monday, January 24, 2022 in Falls Church, Virginia.
Born January 22, 1975 in Pittsburgh, PA. He was the son of Robert and Mary (Bobbert) Rowe of Industry, PA. A 1993 graduate of Western Beaver High School. Served in the Navy on the USS De Wert (FFG-45) from March 1996 to May 2001 in Mayport Florida. He was a 2009 graduate of Robert Morris University. He was employed by the Office of Veterans Affairs in Washington DC. He worked with the Construction and Facilities Management, where he was a dedicated member of the team.
James spent his free time going to comic book conventions. He enjoyed getting commissions from artists. He had the best mashup challenges. He was a very generous man who gave things to other people without reprise. He would give the shirt off of his back for a friend or anyone in need. He was an avid comic book collector. He enjoyed engaging in zoom calls with his family. James will be missed greatly by the people whose lives he has touched.
Preceding him in death was his grandparents, Robert James Rowe Sr, Ida Jean (Zahniser) Rowe, Elsie Rowe, William and Jane (Perska) Bobbert, an aunt and uncle, William and Janet Bobbert.
Visitation, alongside his father’s, will take place Wednesday March 9, 2022 from 4pm-6pm, in the Noll Funeral Home Inc., 333 Third Street, Beaver, PA 15009, additional visitation will be held on Thursday, March 10, 2022 from 10am until the time of service at 11am at the funeral home. Online condolences may be shared at www.nollfuneral.com.
Please join us for the virtual funeral at https://client.tribucast.com/tcid/4802114078
Interment and Full Military Rites will take place on Friday March 11, 2022 at 2:30pm at the National Cemetery of the Alleghenies, 1158 Morgan Road, Bridgeville, PA 15107
Survived by a brother Robert (Theresa) Rowe, New Bern, NC. A sister Laura (Dustin) Ellefson or Industry, PA. A niece Hayley Ellefson and a grand-niece Ava Ellefson of Industry, PA. Many aunts, uncles and cousins. James was survived by many friends that have become his family over the years.
In lieu of flowers, the family requests a donation to be made the hero initiative. Www.heroinitive.org.