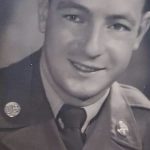 James A. Soisson, 90, of Brighton Twp., passed away peacefully on September 26, 2020 at Beaver Valley Healthcare and Rehab.

Born on March 16, 1930, in Rochester, to the late Anthony and Myrna Snyder Soisson, James was a veteran of the U.S. Army, having served in Germany and Korea as a Sergeant. He retired from Crucible Steel, and as an Independent Truck Driver. James was a member of the United Steel Workers Union and Pittsburgh German Club. He enjoyed most taking car rides, long or short, with his late wife and dog.

Along with his parents, he is preceded in death by his wife of 56 years, Therese Soisson, whom he met while serving in the Army in Germany; brother, Donald Soisson; sister, Henrietta Outten; and a son-in-law, David Davis.

As per Covid-19 restrictions, all services were privates.

Funeral Arrangements have been entrusted to the Noll Funeral Home Inc., 333 Third Street, Beaver PA 15009. Online condolences may be shared at www.nollfuneral.com.