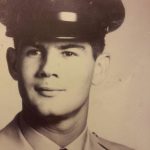 Jack Ransom Javens, Captain, US Air Force (Ret), 80, of Beaver, passed away peacefully in his home on October 22, 2017 surrounded by his family.

The son of the late Paul and Catherine (Howell) Javens, Jack was born on December 16, 1936 in Rochester PA and was a long time resident of Beaver PA.  He was preceded in death by his brother David Clark Javens.  Jack is survived by his three daughters; Julie, Kathleen, and Johanna, their spouses; John, Wade, and John, respectively , and his grandchildren; Dylan and Kelsey, Adam, Elizabeth, and James, as well as by his wife Patricia.

As per his wishes, services and interment will be private. Arrangements have been entrusted to the Noll Funeral Home Inc., 333 Third Street, Beaver PA 15009. Online condolences may be shared at www.nollfuneral.com.   – “People living deeply have no fear of death.” Anais Nin