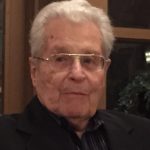 Born January 19, 1920 in Rochester, Pennsylvania, he was a son of the late Homer and Margreth Portman. Homer proudly served in the U. S. Army for almost 3.5 years in Europe during WWII. He was active with Meals on Wheels, the Elks, and the American Legion, and was a past president and member of both the Deer Trails Country Club and Ft. McIntosh Club. A faithful member of Four Mile Presbyterian Church, he served as an Elder. Homer attended the Middletown Church of God while living in Middletown, PA.

In addition to his parents, he was preceded in death by his brother, William K. Portman; and his sister, Mary Portman Johnson.

Interment took place at Beaver Cemetery, Beaver, PA. A memorial service will be conducted Wednesday, January 19, 2022, at 11 a.m. at the Church of God, Middletown, PA. Professional arrangements have been entrusted to the Noll Funeral Home, Inc., 333 Third St., Beaver, PA 15009. Online condolences may be shared at www.nollfuneral.com.

In lieu of flowers, donations can be made in Homer’s name to the Middletown Church of God, Middletown, PA, Four Mile Presbyterian Church, Beaver, PA or Geneva College, Beaver Falls, PA.