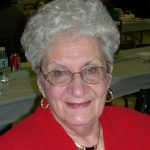 Helen W. (Paulauskas) Gallagher, 85, of Beaver, formerly of Industry, passed away peacefully at her home on Sunday October 29, 2017 after a sudden illness.

Born on October 12, 1932 in Duquesne, PA., she was the daughter of the late Anthony and Alena (Bercas-Kusilka) Paulauskas. Helen attended the Hookstown-Montgomery One Room School House from 1939–1944. She was a 1950 graduate of Chester High School, Chester WV. She retired from Westinghouse Electrical Company, Beaver, PA. She also worked at Foodland Bakery, in Brighton Township, the Lerner Shops, Beaver Valley Mall, and Taylor, Smith and Taylor Pottery, Chester WV.

Helen had many interests, which included a great love of the outdoors, nature, and gardening. Helen also loved to bowl and was a former member of the Midland Women’s Bowling team.

In addition to her parents, she was proceeded in death by her husband Thomas F Gallagher in 2011, a brother, Anthony Kusilka in 1999 and an infant daughter, Cecilia, in 1961.

She leaves behind her sons, John & his wife Susan of Moon Township, and Paul of Pittsburgh, daughters, Agnes McGeehan of Jacksonville, NC, Frances & her husband Joseph Olenick of Colliers, WV, a granddaughter, Brie Gallagher of Charlotte, NC and three grandsons, TSS Donald T McGeehan Jr .and his fiancée Lauren White, of Pikeville, NC, Joseph Olenick and his girlfriend Jessica Pearl and Thomas F. Olenick of Colliers, WV. One brother, Stanley and MaryAnn Paulauskas of Industry, a sister in law, Jerri Kusilka of Fayetteville, NC, a brother in law Daniel & Ruth Ann Gallagher Calcutta, OH and numerous loving nieces and nephews.

Friends will be received Wednesday, November 1, 2017 from 2 p.m. until 4 p.m. and 6 p.m. until 8 p.m. in the Noll Funeral Home, Inc., 333 Third St., Beaver. A Mass of Christian Burial will be celebrated Thursday, November 2, 2017 at 10 a.m. at Saints Peter and Paul Roman Catholic Church, Beaver, followed by interment at Beaver Cemetery. The family asks that everyone attending mass assemble at Saints Peter and Paul Church Thursday morning instead of the funeral home. Online condolences may be shared at nollfuneral.com.

In lieu of flowers, monetary donations can be made to the Beaver County Humane Society, 3394 Brodhead Road, Aliquippa, PA 15001.

The family would like to extend their deepest gratitude to the LIFE Beaver County staff at Friendship Commons for the loving care they provided their Mother during her final days.