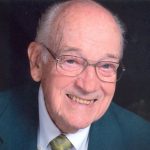 Born November 26, 1926 in Akron, Ohio, he was the son of Guyton, Sr. and Catherine Evelyn Kraus Thigpen and had resided in Brighton Township and Beaver since 1951. In addition to his parents, he was preceded in death by his step-mother Elsie Thigpen, his daughter Diane Christine Frederick, his granddaughter Emily Jane Frederick, and one brother, James Thigpen.

A graduate of the former Akron South High School, he was the first of his brothers to add his name to the school’s storied athletic tradition. Graduating from Thiel College in Greenville, PA., he spent his entire career in finance related positions including J. W. Snedden, Public Accountant, Akron, OH, Michael Baker Jr., Inc., Rochester, Penn Mutual Insurance Co., Blue Cross of Western PA, and the Internal Revenue Service, all in Pittsburgh. While with the Mouganis Agency of Penn Mutual Life Insurance Co., he earned his CLU Degree. While with Blue Cross, he signed the charter for and became Director of the Penn Western Insurance Agency, a subsidiary of Blue Cross that would evolve into the Highmark Group Life Insurance Co.

He served as an AM3/c in the U.S. Navy Air Force during WWII. Guyton’s community involvement included 29 years’ service as Assistant Treasurer for the Brighton Township Municipal Authority, a member of the American Legion, former member of the Lower Beaver Valley Kiwanis Club, and the Fort McIntosh Club, where he served as Treasurer for many years. As a proud alumnus of the Thiel College Class of 1949, he met the girl of his dreams, Janie Baker, Class of 1951. All four of their children would go on to become Thiel graduates. He was a member of Thiel’s 1946 Undefeated/Untied Football Team, Thiel’s Swim Team, Vice President of his Senior Class, Past President of the Thiel College Alumni Association, and Sigma Chapter of the Delta Sigma Phi Fraternity. At the 2015 celebration of Sigma Chapter’s 100th Anniversary, he received the “Sig of the Century” Award. The Thigpen Family established a scholarship at Thiel in memory of their daughter Diane, Class of 1981, who succumbed to cancer along with her first born child Emily in 1991.

A devoted Christian, he and Janie served on a steering committee to determine the feasibility of starting a Lutheran Mission Congregation in Brighton Township. They became charter members of that mission and years later, served as co-chairpersons for Hope Lutheran Church’s year- long 50th anniversary celebration, a highlight of which was the burning of the church’s mortgage. Guy taught Sunday School for over 60 years, serviced as Chairman of the first Building Committee and was treasurer for 40 years. He also served as Communion Assistant, Lector, Usher, and through the years, as a member of the Christian Education, Evangelism, Finance, Property, and Stewardship Committees.

Guy’s spare time was spent following the exploits of his children, grandchildren, and great grandchildren, helping his neighbors, and watching his favorite football teams; Beaver Bobcats, Kane Area Wolves, Thiel College Tomcats, Ohio State Buckeyes, Pitt Panthers, and the Pittsburgh Steelers. He loved caring for his lawn and flower beds and playing golf. Through the years, he played in the Michael Baker and Blue Cross Employee Leagues, the Monaca Golf Association, the Brighton Golf Association, the Ft. Mac Golf League, and the Blue Cross Retirees’ Golf League. He also played in 20 of the last 24 Times-Blackhawk Seniors Golf Championships.

A memorial service will be held Tuesday, October 4, 2016 from 4 pm until 7 pm in the Noll Funeral Home, Inc., 333 Third St., Beaver. A funeral service, conducted by his pastor, Reverend Freda Snyder, will be celebrated Wednesday, October 5, 2016 at 11:00 am at Hope Lutheran Church, Beaver. Interment, with full military honors given by the Beaver County Special Unit, will take place at Beaver Cemetery, Beaver. Online condolences may be shared at nollfuneral.com.