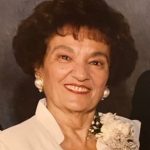 Freda Iona (Colamarino) Guzzetti, 96, of Beaver, died peacefully and surrounded by the love of her family on Monday, September 13, 2021. She was a strong, beautiful and caring woman who dedicated her entire life to her family and to her faith.

Born May 23, 1925, in Rochester, PA, Freda was the daughter of the late Ben and Margherita Colamarino. She grew up during the Great Depression and was a 1943 graduate and cheerleader at Rochester High School. According to an August 2013 article published by the Times that featured Freda’s efforts to host her class’ 70th high school reunion: “Life’s hardships were learned early… There were no buses, no cafeterias, meaning they walked to school — four times a day… since they also went home for lunch.” Despite the times, Freda and her classmates loved to dance and “were the best dancers.”
She later attended Garfield Business Institute, Beaver Falls and became a charter member of the National Secretaries Association. She was employed as an executive secretary at the former First National Bank in Rochester, Freedom, Valvoline in Freedom, and the Treadwell Construction Co. in Midland. She was a former member of Saint Cecilia Dramatic Guild in Rochester, the Rochester Hospital Auxiliary, and the Rochester Jr. Women’s Club.
She met Albert “Ab” Guzzetti – a newly practicing optometrist in Beaver — at a dance on a blind date and they married in 1954. She moved to Beaver and raised a family with him. Freda nurtured and loved all three of her sons and took great pride in their accomplishments, and still had more to give to the community. A strong sense of Catholic faith found Freda an active member and officer of Saints Peter and Paul Catholic Church in Beaver; its Marian Guild and Rosary Altar Society. She loved serving as a greeter at masses, even in her nineties. She was also an active member of the Fort McIntosh Club in Beaver and the Seven Oaks Country Club. She also served as an active volunteer with the Medical Center of Beaver for many decades.

Freda was a spirited woman who had a great sense of humor and was genuinely fun to be around. She enjoyed bowling and playing cards with friends and was an avid fan of the Pittsburgh Pirates, Steelers, and Penguins. She was also a great Italian cook and was known for her superb and prolific baking skills. She will be greatly missed by her family and so many friends.

Friends will be received Sunday, September 19, from 12 p.m. until 3 p.m. and 6 p.m. until 8 p.m. in the Noll Funeral Home, Inc., 333 Third St., Beaver. A Mass of Christian burial will be celebrated Monday, September 20, at 10:30 a.m. in Our Lady of the Valley Parish, Saints Peter and Paul Roman Catholic Church, 200 3rd St, Beaver, PA 15009, followed immediately by interment at Beaver Cemetery. Online condolences may be shared at nollfuneral.com

The family would like to thank the staff and administrators of St. Barnabas / Beaver Meadows for their years of compassionate care given to Freda.