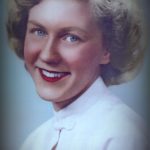 Freda A. Petula, 83, of Brighton Twp., passed away Thursday, September 29, 2016 at Kindred Hospital of Pittsburgh with her loving family by her side.

Born December 28, 1932 to the late John and Kathryn Garnet, Freda worked for many years at Public Drug Store in both Brighton Twp. & Beaver.  She was a Girl Scout Leader, actively involved in the Muscular Dystrophy Association, and provided Annual Easter baskets for the geriatric center and other care homes for over thirty years. Freda was a member of Saints Peter & Paul Catholic Church, Beaver.

Along with her parents, Freda was preceded in death by two brothers, Henry and Steve Romanski, and two sisters, Natalia Romanski and Laura Pruszenski.

Friends will be received Monday from 2-4 & 6-8 pm in the Noll Funeral Home, Inc., 333 Third St, Beaver, where a funeral service will take place on Tuesday at 10:00 am. Entombment will take place at Sylvania Hills Mausoleum.

In lieu of flowers, memorial contributions, may be made to St. Jude Children’s Research Hospital – Partners in Hope.  Online condolences may be shared at nollfuneral.com.