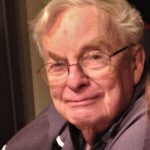 Frank John Edwin “Jack” Mills, 92 of Norfolk VA, passed away peacefully Wednesday, December 16, 2020 at his home.
Born October 1, 1928 in Harrisburg, he was the son of the late Frank and Neva Mills. He graduated from The University of Pittsburgh with a degree in chemical engineering. He was a senior Research Engineer for ARCO Chemical and after retirement, was the Pilot Plant Supervisor for Dart Container Corporation.
He grew up in Johnstown PA where he married his childhood friend Mary Jo “Mame” Stevons Mills. They lived in several communities including the Churchill area of Pittsburgh, Brighton Township, and West Chester PA. It was Brighton Township where they raised their family and where he said they were happiest. They had many special years together until her death in 2011.
He is survived by a son, John “Jack” Mills (Lynn) of West Chester, PA and two daughters, Joan “Jill” Culver (German) of Culpeper, VA and Janete “Posie” King (Kelly) of Norfolk VA. He has 6 grandchildren German Culver, Kimberly Culver, Kathryn Culver, Abigail Culver, Kevin Mills, and Spencer King. Along with those who referred to themselves as his “adopted daughters” and numerous friends that lovingly called him Grandpa.
A funeral service will take place Saturday, January 9, 2021 at 11 a.m. in the NOLL FUNERAL HOME, INC., 333 THIRD ST., BEAVER. A private interment at Beaver Cemetery will follow. Online condolences may be shared at nollfuneral.com
As he loved animals, in lieu of flowers, memorial contributions may be made if desired in Jack’s name to the SPCA of Norfolk (norfolkspca.com).