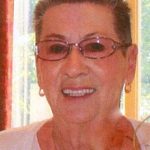 Faye M. O’Shaughnessy, 81, of Vanport passed away suddenly on Sunday, September 24, 2017, surrounded by her loving family.
Born November 13, 1935 in Graysville, Ohio, she was a daughter of the late Watt and Olive Blanche Christy. A resident of Brighton and Vanport Townships for over 45 years, Faye was a fixture in the community, known for her warm smile and special ability of making a total stranger her best friend in a matter of minutes. She fostered many friendships through her love of playing cards, trips to the casino, and participation in dinner groups. Faye’s greatest passion was for her family, where as a devoted mother and attentive and proud “Mimi”, she joyfully welcomed her first great-grandchild into her gregarious Irish family. She was a member of Saints Peter and Paul Roman Catholic Church, Beaver.
Faye was preceded in death by her beloved husband Raymond “Red” O’Shaughnessy in 2009; and two brothers, Lloyd and Gene Christy.
She will be greatly missed by her sons Michael R. (Phyllis) O’Shaughnessy, Brighton Twp., and Phillip O’Shaughnessy, Beaver; a daughter, Deborah Faye (Todd) Hindman, Beaver; one brother, Ralph (Peeper) Christy, Rittman, OH; her sister, Arlene Stupak, Carlisle, PA; three grandchildren, Megan (Andrew) Scott, Ryan O’Shaughnessy, and Rebecca Roberts; and her great-grandson Harrison Michael Scott.
Friends will be received Tuesday, September 26, 2017 from 6 p.m. until 8 p.m. and Wednesday, September 27, 2017 from 2 p.m. until 4 p.m. and 6 p.m. until 8 p.m. in the Noll Funeral Home, Inc., 333 Third St., Beaver. A Mass of Christian Burial will be celebrated Thursday, September 28, 2017 at 10 a.m. at Saints Peter and Paul Roman Catholic Church, Beaver, followed by interment at Beaver Cemetery, Beaver. Online condolences may be shared at nollfuneral.com.
In lieu of flowers, memorial donations in Faye’s name may be made to the Ft. McIntosh Foundation, 374 College Avenue, Beaver, PA 15009.